We are home family kennel, situated in a small village Koplotovce near river Váh in the western part of Slovakia - the heart of Europe. I would not even call us a ´kennel´, since we breed Samoyeds only occasionally as our hobby and our Samoyeds are most of all members of our family. It´s been in 1995 since Samoyeds conquerred our hearts. Year 2020 is our 25-th years´ anniversary of living with and loving Samoyeds. We are proud members of Samoyed Club of Slovakia as well as many foreign Samoyed Clubs and Associations. We bred many beauty Champions, but also Certified working dogs in sled racing, agility and obedience, canistheraphy, dogdancing, hunting.... WE ARE PROUD OF ALL OF OUR PUPPIES, love them dearly and are always ready to take them back to our house if unexpected life circumstances occure, as we did over the years many times. Our goal is to breed a healthy happy Samoyed preferably as a multi purpose family dog for work, sport and for shows – if interested.

YOSHI AND US FAMILY

We are a big Yoshi-family team: me (Jana Fuernkranz Fulierová, a high school teacher), my husband (Anselm Fuernkranz, an IT specialist), my 19 years old daughter Janka and 7 years old daughter Zojka – they help us with show handling a lot. The rest of our extended family (my brother and his family) also helps us a lot as they all love Samoyeds as much as we do, they basically are babysitters of our Sammies when we are travelling and they are our devoted fans and supporters.

Our puppy owners become members of our world-wide Yoshi family. We regularly meet at Show and different occassions in Slovakia or abroad, with many of them we became true friends. We are always there for our puppy owners with advice or support. We are always ready to take our puppies back to us if any difficult life circumstances occure in our owners lives. We are here to listen and advice 24/7. Over ther years we have grown really close with many of our owners and their family members. We feel blessed we have our Yoshi family.
Puppies leave to new homes from the age of 9 weeks. By then will be vaccinated (puppy canine diseases), 5 times dewormed, chipped with Pedigree (if issued by our Kennel Club by that time) and Pet Passport.We take individual pictures of puppies every week, staring in week 2-3, after they open their eyes, so our future owners can see how they develop. Descriptions of their character are supplied regularly, as their character changes around week 4 and week 7. Of course, if the borders are open, they are sincerely welcome to come and choose a puppy personally, which can be done from week 6 on. The puppy receives all necessary things to start her/his new happy life (wetbed, leash, harnes, toys, vitamins, deworming pills, tick treatment, food, treats, cosmetics, brushes, bowls...). We use ProPlan salmon for puppies and combine it with meat, different vegetables and fruits as well as white yoghurt and seaweed. The puppy is trained to withstand weekly brushings, we teach her/him how to walk on the leash, be in a car, stay in a house, meet different people, kids, animals... socialization is very important to live future happy life.

I started with a male Samoyed in 1996 and it took almost 8 years before the first litter, which was born at our Yoshi and us kennel in May 2003. Our first Samoyed was Yoshi, who was bred by Mr. Taszli at his "Kartuš" kennel - Slovakia. Xamba, Vikke, Xamba II. and Grace came to us from Finland (thanks to Tuula Hämäläinen-Pratt - Humoresque, Riitta Tuomaala – Snowmist, Miia Okechukwu - Winterday´s and Katja Korpisalo - Ramzai), Annie from the Czech republic (her ear never came up so she was our beloved pet all her life), Azi, Benji, Sissy, Misha, Chilli, Tana were a progeny of our beloved Xamba. Sky was a son of our Italian export Ch.Bold Prince of Yoshi and us, Kiki, Tas and Striker came to us from Great Britain thanks to our good friend Hazel Fitzgibon – Smiliesam, Penny Roberts – Archaeus and Liz Ballantine - Whitespirit. Grace is a daughter of our Finnish export Ch.Galaxy O´Xamba Yoshi and us, and is already 5-th generation of our beloved Xamba. We have also imported son (B.J.) and daughter (Skylar) of Benji from Estonia (thanks to Margus and Katrin Oinits - Lumeingel). Some of our „puppies“ were over the years joining us as their owners could not keep them anymore, so number of our dogs was always aroud 10. We also take our puppies in during the holidays and days off, so their owners can happily travel on holidays – we prefer to have them with us instead of going to a dog Hotel. During Summer there is always some visitirs raising numbers of our dogs up to 15 at the times 😊

❤️ Rainbow bridge: Yoshi, Xamba, Annie, Kiki, Misha, Benji, Azi, Fík, Vikke and Sky had left us and went over the rainbow bridge over the years, but they stay in our hearts forever...

At the moment we have ten Sammies: Jasper, Yoshi, Tana, Chilli, Wasabi, Azi II., Benji II. and Zorro were born here as they are puppies from our own breeding and Tas and Skylar are imported from UK and Estonia, both sired by our home-bred boys („half-Yoshies“). In 2018 our team was joined by Datura II., Lithuanian import (Klajokliu Šuo - thanks to Dalia and Evaldas Mickis), to refresh our bloodlines.

Our Samoyeds take part at shows, but they also work as a sports sled team,
visit disabled children in canistherapy programmes, but most of all, as already mentioned above, they are loved members of our family and they all live their happy lives in our big family of people, dogs, amazonian parrot Wafzi and 2 cats: Muro and Miau-miau. In 2020 we rescued Siberian Husky puppy, his name is Yoshi.

All of our Sammies are trained and work together in harness as a good team – trained by Anselm, they love running, hiking and swimming, they love working! We believe that dogs must be well trained and socialized to be a success in life and in the show ring.

We do not look for the most titles from dog shows when looking for the best male for our girls. In fact, over the years titles became the least important interest of all. We like breeding couples where both of parents have an excellent character, are „easy to live with“, are healthy and according to the Standard of the breed. I prefer linebreeding, which means I always breed to keep my old lines in my Pedigrees. Reason to that is that I do not want to lose those lines, as they proved to be healthy and very stabile in producing „my type“ of a Samoyed. I am proud I have achieved recognition of puppies I breed – „Yoshies“ - by their lovely typical heads, great characters and personalities and powerful movement.

YOSHI AND US TEAM 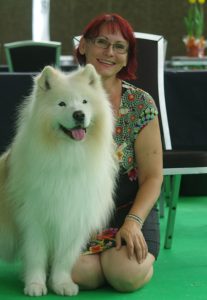 Jana fell in love with Samoyeds during her 2 years´stay in Vancouver, Canada, where she took care of them in her host family. In 1997 she acquired her first Samoyed „Yoshi“ (Ch. Kevin Kartuš) – he gave name to her Kennel, as he became the centre of her life so everything was about Yoshi ... and the rest of us. As the breeding of Samoyeds in Slovakia was at that time rapidly declining, she felt to be responsible to re-introduce this beautiful breed to the public and started a long-term promotion of Samoyeds, which later led in writing and producing a book about them as well as in foundation of a non-profit breeding association – Samoyed Club of Slovakia, and worked in its Commitee as well as in Slovak Kennel Club Health Commitee up to 2018. For her cynological activities she was in 2013 awarded Bronze honourable medal of the Slovak Kennel Club, in 2017 became International FCI Judge and also contributed to another book about Samoyeds, she is recently studying the rest of the breeds of V.FCI Group to add to her judging list but left the Commitees to focus on her family and dogs. Jana loves her job - being a hight school teacher of English and Economics surrounded by "young and restless" students every day keeps her young at heart. She also loves creating different ornaments with her daughters as you can see above. 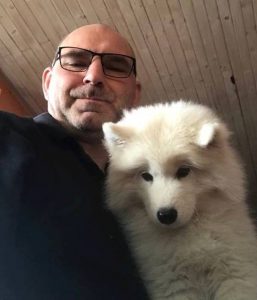 Anselm joined our Yoshi-family when he got Tana – a Yoshi puppy in 2016. Since 2018 we are engaded – so we assume Tana was our love angel – white fluffy cupid. Since his age of 8, Anselm´s family was always surrounded by dogs. His first own dog was a flat coated retriever which he trained to a very successful rescue dog and also obedience, he was followed by a Siberian husky Datura a short time later. In her he found his love to the northern breeds. Datura was his one and only dog and taught him a lot about Nordic dogs, and when she died in the age of 16 years old, she left a deep hole in his heart – thus to be filled by Samoyeds he started to be interested in and after he met his first Sammy on a dog show they got him immediately with their perfect character and smile, and a year later his first Samoyed joined the pack of aussies they had with his ex-wife, and of course a second one followed a few month later – Viburnum Lantata of Yoshi and us. Fascinated by these versatile beauties and their abilities he started with canicross, scooter and bikejöring with their 2 Samoyeds and later on with cart/sled riding in Yoshi and us team. He is a devoted member of the Commitee of Austrian Nordic Breeds Club since 2018. His knowledge of dog behaviour, training dogs in different fields, but most of all his helping hand and love for Samoyeds (and all of us) is greatly appreciated in our Yoshi family team. 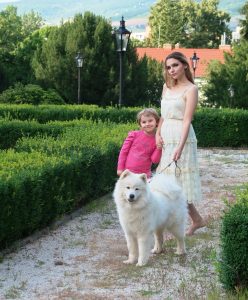 Janka is very tallented: she is great at shooting and editing short videos, creates advertisements, cards, leaflets and promotion materials. She is a gifted photographer, model and make-up artist. Recently she is quite well-known you-tuber and influencer, her you-tube channel is JANCUCIK. Our Samoyeds quite often appear in her videos.
Zojka has always been our sunshine, she started her school last year, but she will surely be our future handling star as she loves competing in handling competitions for children. 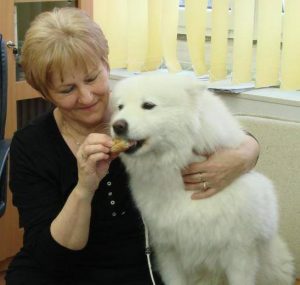 When I got my first Samoyed, my goal was to promote this beautiful breed, because there were almost no Samoyeds in Slovakia. So I ended up organizing „the Day of Samoyeds“, annual meeting of Samoyed owners, breeders and fanciers, I also spent 3 years writing a book about Samoyeds, which was published in 2003. In 2006 I founded the Samoyed Club of Slovakia and its activities helped a lot with promotion of Samoyeds not only in Slovakia, but worldwide. As a young small Club we organized the 2-nd World Samoyd meteting in 2009 in Bratislava. In 2016 our Club published book about Samoyeds. I was a member of Commitee up untill 2017. Then I founded a non-profit organization which aims its activities to help children with eating disorders, mainly anorexia as my daughter Janka suffers from it. Since 2008 I am actively involoved in canisteraphy activities and projects of different kinds.

Yoshi and us world-wide family 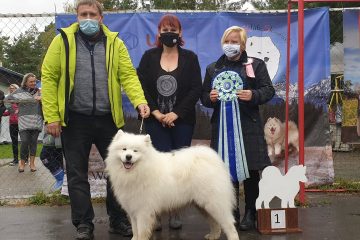 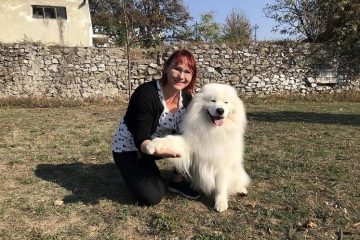 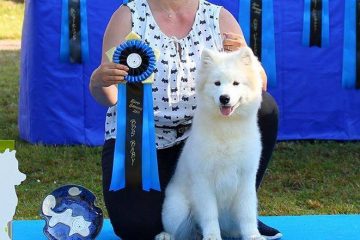 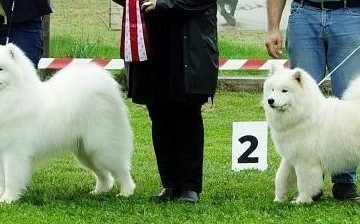 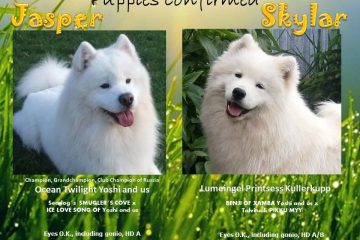 We are happy, that puppies are confirmed by USG 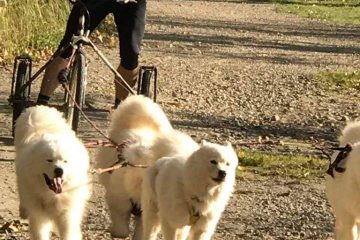 Our Samoyeds and Samoyeds from our breeding are trained and participate at many different sports activities, e.g. sledding, agility, obedience, canicross, scooter, hunting, weightpulling… we are very proud of all of them since we believe Read more…